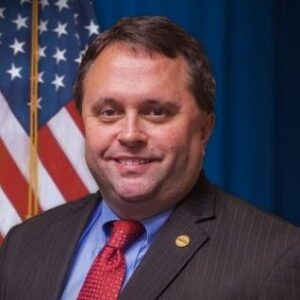 A prolific reader at an early age, he read many of the books in The Hardy Boys mystery series before completing third grade. Frank’s family has a love of America and a history of civic leadership that spans generations. He has followed in that tradition, having been actively involved in the political process for more than two decades, including serving as a local elected official.

After graduating from North Brunswick High School in 1988, Frank earned a degree from North Carolina State University’s Department of Communication in 1993. In August of 2001 he formed Pioneer Strategies, a public relations and strategic communication firm he still owns and operates. In January 2019, Frank and his wife co-founded Pioneer Specialties, a promotional products distributorship based in Leland.

In his free time he enjoys writing, reading, action movies, politics, fishing, the beach and rooting for the N.C. State Wolfpack. Frank lives in Leland, N.C. with his wife, Lori.